As we seem to be sharing photo's of Running Smiles (just see Chris's grin at the end of his Bear Mountain Ultra), I thought I would share some photo's too.

These photo's aren't of me, but of friends that I know.

The first is my friend Tracey who ran her first 10K in over 3 years due to injury.  She just entered and went for it.  As you can see at the post-race drinks, she was jubilant and she had every right to be.  It was a fantastic performance -- on occasion I had a hard time keeping up with her. 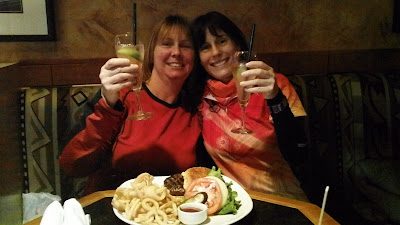 The second photo is of my friend Ellie, who ran her first ever race on Sunday.  She has only been running  for a few months and this is a real achievement for her.  This race proved to her what she can accomplish. 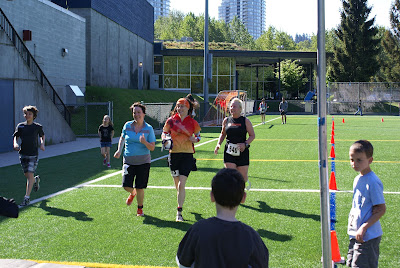 My job at these races was as Tracey's and Ellie's pacer.  At both races I ran behind them just giving encouragement and making them laugh.  I was like annoying running fairy;  Just out of reach and making them giggle.

I was very honoured to be part of their races -- to share their joy and achievements.  I don't think I have ever had so much fun at a  race in a long time.  Seeing these wonderful, determined and frankly in my opinion awesome people push themselves and run with enthusiasm made me remember what running is all about.

It reminded me how it felt to reach that first running goal -- to realise that you can do this.  To have that feeling in your stomach, as if you are on top of the world; that you can achieve anything you put your mind to.

There is nothing more powerful than that feeling and I can't help but smile when I thank them for allowing me the pleasure of being a part of that.

Sometimes running at someone else's pace is all you need to Run :).
Posted by Katie Kift at 6:01 PM