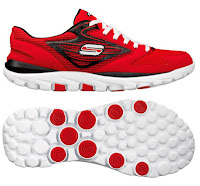 Introduction
Before I met one of their reps at a race, I didn’t know Skechers had hopped on the minimalist bandwagon. As a matter of fact, I knew little about the company, except for the Shape-Ups models that left me dubious, to say the least. The rep explained that the GoRun was a shoe intended to help runners transition from a heel strike to a more natural, mid-foot strike pattern and suggested I try them for myself. I took a couple steps in them and was unconvinced, but curious. So I decided I would give them a real try.


First impression
This shoe has a unique design with the outsole curving upwards at the heel and 9 “pods” at the mid-foot, which elevate and curve it downwards. The idea here is that if you try to heel strike, the GoRun will correct your posture by “rolling forward” to your mid-foot, thus theoretically helping you adopt a more natural stride.


Road test
I ran two times with the GoRun. The first, a 5k commute, left me feeling very strange because of the elevated arch and the presence of the “pods”, which I felt impeded my forefoot strike. On the second run, the way back home from work, I had to take the shoes off at 3K and finish barefoot, because my arches hurt and my stride was totally off.


After discussing with the Skechers rep again, it became quite clear that this shoe is not made for runners who have a forefoot strike, which means it is not a minimal or barefoot shoe, nor is it fit for anyone running with a barefoot form. That left me with the problem of properly reviewing the GoRun, until I had the idea of asking heel strikers to give it a go at the running track, and see how they felt about it.


Track test
Without telling them my intent, I asked a range of runners to run a 400M lap with their standard shoes, than one barefoot, than one wearing the GoRuns. I wasn’t overly surprised with the results; the shoe only seemed to work well with heel strikers. They reported they could feel the shoe “roll” forward which, in turn, made them shorten their stride. They weren’t bothered with the arch section, probably because they are used to such “supports” in their conventional footwear. They were delighted with the shoe’s feather weight and with the sole material, which is very soft and flexible.


Shod runners with a natural form (mid-foot to forefoot strike patterns), on the other hand, were left dubious and reported they felt the arch section was “weird” at best, “impeding” in the worst cases. Aside from the sole, they liked the GoRun’s design and often compared it to the original Nike Free model.


Analysis
I didn’t notice a big change in the heel strikers’ postures, aside from the shorter stride. I was shocked, however, to review pictures from my natural runners, whose form was negatively altered in all cases. It seems the thickness of the outsole and its design had a negative impact on the natural runners’ form; it lengthens their stride and brings back a heel strike-like pattern, with the “roll forward” effect happening on the outside of the shoe, causing an under pronation. The example below illustrates the differences in form in a natural runner : 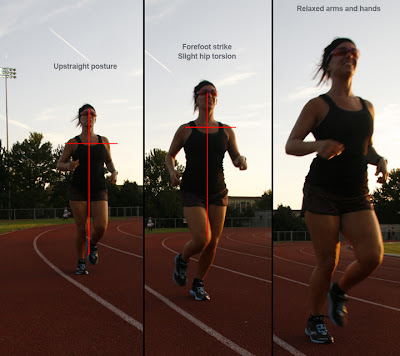 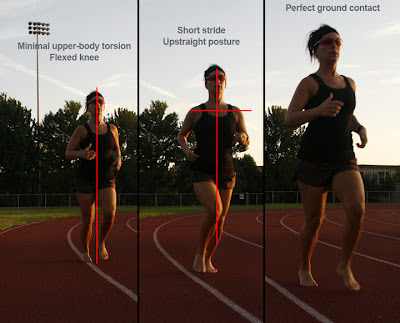 Third, in the GoRun : 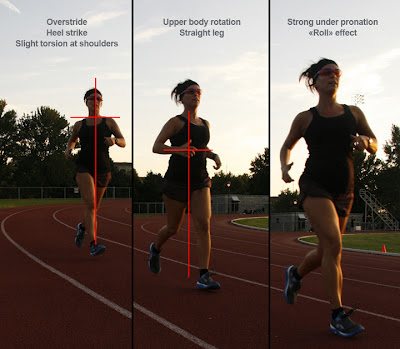 Conclusion
It became quite clear, during this test, that the GoRun is not recommendable to natural runners who have already learned to land on their mid-foot or forefoot. The elevated arch section, rounded heel and “sensor pods” will only impede proprioception and change their landing patterns.


Heel strikers, on the other hand, seemed to be “pushed” toward a shorter stride, which makes them land closer to their center of gravity, certainly not a bad thing. However, this made me wonder: shouldn’t runners learn better form themselves, instead of relying on the design of their shoes? Isn’t that exactly the same issue as with orthotics?


When all is said and done, learning good form is not only about where you land; it’s also about understanding biomechanics and making the conscious effort to kick off your shoes, re-learn proprioception and develop an improved muscular structure. But if all it takes to point you in that direction is a pair of GoRun to start your discovery of natural running, Skechers might have succeeded in creating a “transition” shoe.


The equipment for this personal review was supplied by Skechers, free of charge, without any conditions.
Posted by Flint at 8:55 AM