FlintLand | Running with the Navajo 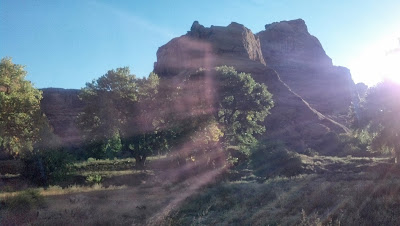 
«Ya'at' eeh. As is Navajo tradition, please allow me to introduce myself.»

Shaun Martin doesn't speak like everyone. Tall, calm with vivid, fiery eyes, you couldn't miss him in a crowd of hundreds. He stood proudly in front of the runners, and went on to recite his name and his family background, in Navajo language.

«What I just did is state my name, my clan and my origins. I started by saying Ya'at' eeh. Translated to English, it is a salutation which basically means that you and I, we're good».

I felt immediately at ease. I'd traveled to Navajo Country with my friend La Mariposa and we'd arrived in Chinle, Arizona, just as the sun set over the distant horizon. The sky is large, here, the land is vast and the air is crisp. Sitting in an outside amphitheater, surrounded by runners and listening to Shaun, I was right at home.

Canyon de Chelly (promounced «De Shay») is a place of legends. This space is sacred for the Navajo, and its access is strictly prohibited to anyone unless their clan lives inside the tall red rock walls. Visitors and tourists may glance at it from top lookouts, in the distance. As a world first, on October 12, we runners would have the immense honor of being allowed inside the Canyon and the great privilege of running its entire lenght.

After an evening of connecting with participants and organizers, where my imagination took flight with canyon legends and my heart filled with a deep sense of kinship, we went to sleep for a couple hours among the distant howls of the coyotes and the neighing of the wild horses. The next day, before first light, we made our way into the dark to a warm bonfire where a traditional breakfast of blue corn mash was awaiting us.

There, in the biting cold late-night breeze, gathered in a circle around the fire, we participated in a prayer to the new day and received an intimate blessing of cedar smoke, from a shaman who spoke to all in a mix of Navajo and English.

«You are about to perform a sacred act in the Navajo culture, called Dàghààh. Your footsteps will touch the earth while the sky awakens and sends its first sunlight. As you enter the mouth of the Canyon, the walls will slowly rise; this represents Mother Earth's arms opening to invite you, then rising up to take you to Father Sky.»

We left the warmth of the fire and took a couple steps to the starting line. Shaun stood at the front. «While you travel inside the Canyon, you are welcome to follow Navajo tradition and holler out to your heart's content. The more, the better. Your howls will echo along the rock walls and be heard from a great distance. Canyon residents and visitors to the rim are going to witness a very rare, awesome display of running today.»

Without any need to say more, both Shaun and the crowd united in a huge, wild, primal howl and the runners burst out in the early light. The moment was unique, magical, electric. A long line of awe-struck runners formed as we slowly left the low sand wash and entered the Canyon. Every step took us further in, swallowing us whole in unspeakable beauty.