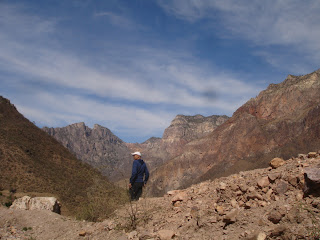 He’s been pictured as The Lone Wanderer, The Ghost of The Sierra Madre. A man of legend, an obscure mystic who dropped out of a former life to become some kind of a gatekeeper to a hidden culture of super humans.

The real story, however, is much better than this.

Micah True is a simple man, in all the best meanings of the term. Much like the Raramuri, he comes across as soft-spoken, calm and radiating with a humble pride. But that’s where the comparison ends.

Before meeting him, I was somewhat apprehensive that he might be a “convert”, trying to be more Raramuri than the Raramuri themselves, or some sort of overwhelmed preacher trapped in a one-way logic. It took the best part of a minute for these thoughts to vanish when he shook my hand for the first time.

Within minutes, we were simply sitting together, sharing stories, planning to meet up later in the week, down in the canyons. Simple as that. Sure enough, a couple days after, we met again. It was even better this time; he’d found a new friend up in Creel and brought him along. It was Olaf, another aspiring Mas Loco soon to become “The Badass”. But that’s an entirely other story.

Since our first run, what struck me the most was how Caballo isn’t trying to be anyone else than himself, an impression that still holds after spending a couple weeks traveling and running together. Micah True doesn’t try to be a Raramuri, and that’s partly why I think the Running People appreciate him so much.

There’s a reason this man is welcome anywhere in the Copper Canyons, and it has nothing to do with fame or legend. People recognize him as a kindred spirit, a person of peace and a fellow runner. And he, in return, simply treats them the same way.

I consider it a privilege to have shared some of his travels, not only by running the ultra marathon but by taking part in the background work that leads to it, which is a story I feel needs to be told.

Months before the actual event, the cameras and the buzz, the White Horse is hard at work, making sure the extensive logistics will be in place, in time and ensuring the word spreads around in the canyons. Runners near and afar have to be invited, trails need to be maintained and marked, aid stations must be stocked, corn vouchers purchased. “It’s colossal work”, I once told him while running on the trails. “We are messengers”, he answered, “expressing hope, love and respect”.

I didn’t grasp the full extent of Caballo’s words before quite some time. But after having seen him work, travel, run, live, laugh, struggle, overcome and persevere, I got it.

However, it’s only after the race was over, after the elation, after I had left even my new brother Olaf to slowly make my way back home that I realized the key part of Micah’s phrase, that day. It’s a simple, two-letter word that holds all the power of Caballo Blanco’s actions inside and out of the Copper Canyons and that best sums up all the love and respect I have for him.