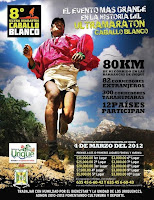 Everybody wins. I’d heard Caballo Blanco say it a couple times before the true meaning really sank in. This is not some kind of marketing spin to make a race interesting; it’s the core principle of an event that celebrates a culture and a way of life. Whoever you are, if you run in the Copper Canyon Ultra Marathon, you will win.

During two fantastic weeks of awakening and amazement, I had the privilege of traveling in and around Urique and Batopilas with the White Horse. I witnessed the reality of life in the canyons, away from the superlatives and the fantasies. Along the way, I met wonderful people, visited awe-inspiring environments and experienced first hand what it’s like to live with and around the Lightfooted Ones.

Instead of super-humans, I met real humans. I wasn’t struck by a People suffering a plight; I encountered a People living its life. My attempts at creating a contact were not rebuffed or ignored, they were quietly acknowledged. I didn’t see fear or resentment for strangers in the people’s eyes; I felt their humble pride and their resolve.

This year, 500 men and women toed the line together at dawn in Urique, looking forward to a day of joy, of physical achievement and of sharing the love for running. Some had traveled the canyons to partake in this unique event, while some others had crossed half the world. I couldn’t help but notice that the start wasn’t given by a gun. It was given by a beautiful, beaming pregnant woman who simply counted down from 3…

From the first instant to the last, the Urique canyon was united in the celebration of running. All differences faded away, as the long, colorful line of people started climbing up and down the sunny trails, over the river and along the great rock walls. The only sounds you could hear that day were the echo of cheers and the crispy noise of footsteps on the rocky paths.

Even after the sun faded away over the rim and the winners had long arrived, the whole community was still exuberantly cheering home its last champions, coming in dirty, exhausted and overwhelmed with emotion as they took their last steps toward the finish line.

Late into the evening, with music all around, runners would cross each other in the street, nodding approvingly, smiling at the colorful bands adorning their wrists and sharing the great pride of having been out there together, in this magical place that had become, for just one day, the center of the world.

We all came into the canyons to celebrate peace, hope and health. We shared the joy, the effort, the challenge and the inspiration, drawing on each other in times of need and giving without ever asking anything in return. We left Urique already yearning to be back, feeling a deep sense of kinship, having experienced a great truth.

We are all one.

We are the Running People.