I have put together a short summary for this post since I have gotten so behind on my blog. Here are some of the Run Smiley barefoot runnings I’ve been doing in the fall of this year.

For my Run Smiley Virtual Run, on Saturday September 24, I ran the Runner’s Life Point to Point 30k from Peterborough to Warsaw. I had run this once before in the spring of this year, but this time I wasn’t training for a marathon. Without having put as much mileage into my training I found this distance to be a bit of a challenge. However, the biggest challenge was the surface conditions for a section in the middle of the run. The addition of the pea-gravel for about 5k of the run was no treat either, but my feet will be that much better for it. 30k Time: 3:15. 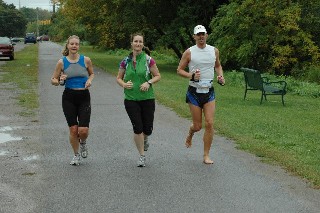 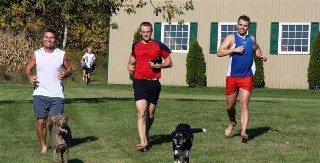 Warkworth 8 Miler
I ran this country road/trail race once before 2 years ago and finished in 1:15. I was happy with my time this year considering it was quite windy but at least it was 10°C and the sun was out for most of the race. 13k Time 1:08. 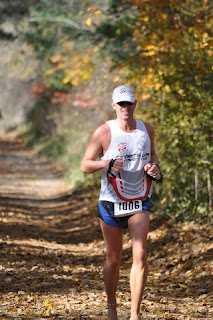 Wow! I actually won a race! It wasn’t a “real” race since it was a charity walk/run event, but still I have never won one of those before either. 5k Time 22:40. Then I went on in my euphoria to race a Halloween costume 5k trail race. A very successful fun-filled day for me. 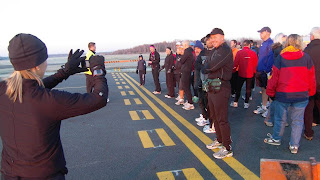 Not a bad time considering this was my second race of the morning. I started off too fast, but soon realized that I had already spent most of my energy. I was able to settle into a doable pace and finish strong though. 5k Time 24:26. There were a lot of good costumes this year. Good times! 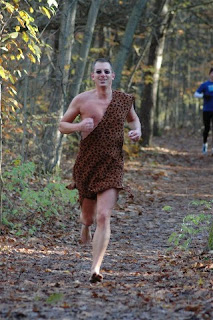 I drove to Hamilton for the race in the morning. I had eaten breakfast at 3am and was on the highway by 4am. So I was feeling quite hungry by the time the race started. I started out fast, maybe too fast. A little before the 3k aid station I got a stitch pain under my lower right rib and had to walk. I drank some water and walked a little after the aid station as well. I tried to relax to keep the pain away and at that point I was starting to descend the hill. So I relaxed my legs, sped up my feet and went flying past many people. By the time I got to the flat part around 10k I was feeling pretty tired. At that point I thought I was shooting for 2 hours. Then Bob came by on a bike and motivated me by telling me I was still on track for 1:45. By 15k Mabel had caught up to me and was pulling away. I decided I would do whatever it took to stay with her. Every so often she would get ahead of me and I would have to push it to catch up. I was wondering if she was as tired as I was because she didn’t look it. In the last kilometer I noticed I was in front of her but I didn’t dare look back. I pushed with all I had left to get to the finish. I was able to do a final sprint in the last hundred meters to pass four or five people in front of me. I was very surprised and happy when I read in the results that I had just run a new half marathon PB with a time of 1:44:41. 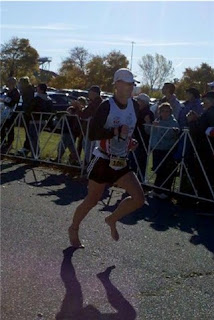 Zemgear
I met up with Arlen from ZEMgear Canada after the race in Hamilton. I told him a bit of my running history and about my experience with the Zems last winter. He asked me if I would write on the ZEMgear blog and I said I would. He then gave me a free pair of the new 360 split-toe model, a ZEMgear t-shirt and said I was now an official ZEMgear Runner.
Last year’s model was great for snowy bitterly cold runs, but couldn’t stand up to the rough surfaces. 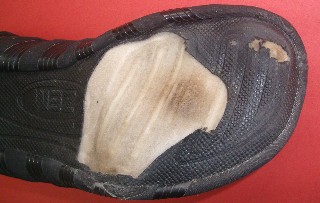 I will be testing this year’s new and improved 360 model. Now I am just waiting for the cold snowy weather.

Whitby 10k
Two years ago I ran the 10 miler in Whitby with Paul and Vanessa. This year I ran the 10k and the temperature was about 10°C warmer although there was a bit of a wind. I ran this with Deb, Bob and Kevin. They are all quite fast and I wanted to get a 10k PB here, but I really wanted to try to keep up to Bob. I realized that was a mistake at about 3k. Bob and I started out very fast (faster than I usually start a 5k). By the 3k mark Bob was starting to leave me behind and I was left to try to get through the next 7k with a fatigued body. I was able to pick up my sluggish pace for a nice sprint at the end encouraged a lot by Bob yelling “HEY, IT’S THE BAREFOOT RUNNER FROM PETERBOROUGH!” and running the last several meters with me. Thanks Bob. Although I couldn’t keep up to Bob’s 42:36 time, I did get my PB with a 46:14 time and best of all free chili and beer. 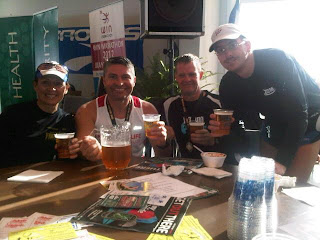