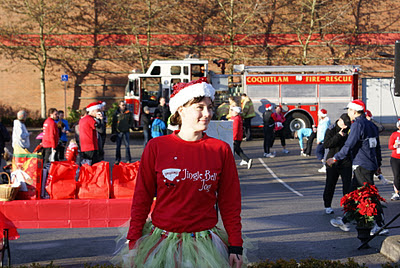 Wow, a race report.  I haven’t done one of these since… well I broke my knee in June.  I did have a 10K scheduled last month, but as I had re-injured my knee around the same time, it proved to be my first ever DNS. Oh well. I like DNS, means I don’t have to remember a string of numbers every time I want to see videos of pets on “Youtube”.  Sorry, that was a very geeky reference – couldn’t help it!  About half of the readership of this blog is going “huh? I don’t get it”.

So it was a 1K kids race around the parking lot and then a 5K jog,  which went up some trail over a few roads -with nice RCMP cops blocking the roads- and a run around a park.  For a 5K –an especially a 5K where I wasn’t planning on running fast or furious – there isn’t much to say. I ran it and then I stopped.  No need to discuss race strategies, fueling plans, pacing or training plans.  The whole race pretty encompassed the ideas of  “turned up, run, finish and get the good muffins”.

Although of course, this is me we are talking about and although I spend my life in boring conformity, I do break the rules occasionally.

So, first rule broken (and one I break repetitively), I will not dress sensibly.  I had asked D about a month ago if he wanted to run and if he wanted a racing TUTU from Glamrunner.  He said he wanted to race, but he didn’t want a TUTU (despite the fact he had spent a large chunk of his time in one since I brought mine back from NYC).  However, of course, he changed his mind last weekend.  As I knew it was too late to buy one, I decided to make one for him, (sending good vibes to Glamrunner in the process).  He also insisted I have one too, so a plethora of tulle, lots of elastic, ribbon and an evening later, we were the proud owners of 2 Christmas race TUTU’s.  Luckily no cats, dogs, kids or fish were harmed in the making of the TUTU’s although that is probably a close run thing! 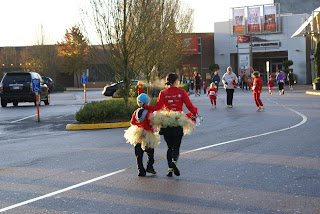 We already knew that we were going to be getting Santa Hats and reindeer noses, so all that was left was to figure out was my race music and what shoes to wear (if any).  It had to be Christmas Classics of course; so I had John Lennon, Paul McCartney, Bing Crosby and a whole host of other stars to rock too as I ran with one iPod bud in my ear.  Running with music is a contentious issue, but I think you have to have some form of Christmas music accompanying you if you are dressed like the fairy off a Christmas Tree!

Last but not least was what to wear on my feet.  The weather reports seemed to indicate freezing temps at the time of the race.  I had also discovered a patch of eczema on my one of my toes, so barefoot was out. I decided to see if a combination of toe-socks and my Invisible Shoes (6mm) would do the trick.  As you may remember the 4mm was lost in the “urban myth of the NYC Barefoot Run”.  So now I was a gladiatorial Christmas Fairy! 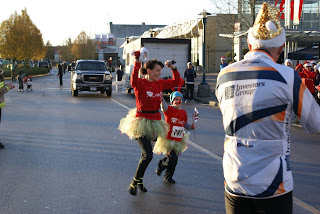 We caused quite a sight at the race start, which we only just managed to catch. D’s race was first and we literally sprinted to the start and we were off.  He was awesome.  I think he ran the whole way, only stopping to pick up his reindeer antlers.  This was so much different to 6 months ago when I had to drag him around the course. The “Mothers’ Day race “was “pre-minimalist shoe” and it showed.  He would never have run this far before, or have such a big grin on his face.  He did awesome and he made so many people smile. 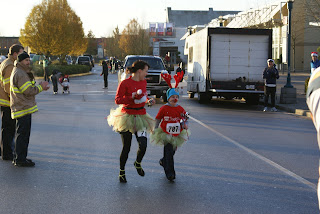 He had also asked on his Santa list for a “Giant golden trophy” for Christmas. (I haven’t figured that out either). So yesterday I scoured the stores looking for a giant trophy.  I managed to find a small one and it was enough.  I slipped it to Santa and brought D to him after the race.  The look on his face was priceless and you could see that it had made his day 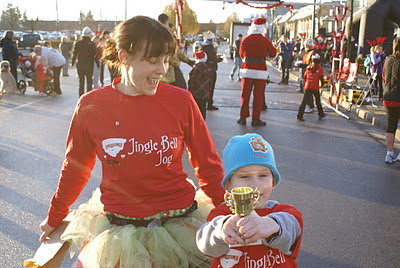 I then went off to my race as M and D went to look for coffee – no point everyone standing in the cold for half an hour as I was running.

I achieved every single goal.  My bright neon, funky sandals and I had a blast.  I am glad I was wearing my sandals as we ended up running about a mile or so on gravel trail.  I love these things.  They were light, they were funky, they worked and I was able to really feel the ground.  I passed a few runners tying their shoes and I didn’t have to re-tie my sandals once.  I think I also peeved off a few people.  It must be quite demoralizing when you are huffing and puffing to have someone pass you who isn’t  wearing proper shoes but who is also singing really badly.  I did say “Merry Christmas” to them when I passed, so hopefully they will forgive me. 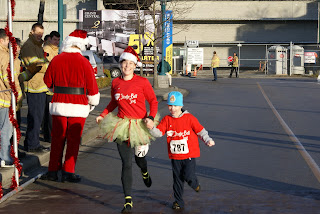 M and D JUST made it to the finish as I got there.  There were lots of hugs, cuddles and giggles.  It turns out despite my best efforts to take it easy I was 5 minutes quicker than I planned.  I was about 27-28 minutes, which as I haven’t run 5K in about 3 weeks and I haven’t been training properly for 6 months because of my knee I was pretty impressed.  I also know I wasn’t going full belt because apart from the gunk from my cold last week I didn’t feel out of breath at all.  Just goes to show that “Running Christmas Smiley”, isn’t as hard as it looked.  (Also I think a Running TUTU provides magical powers!) 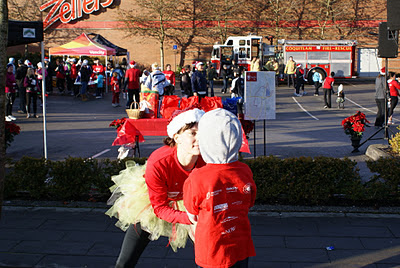