What Are You Doing For Your Birthday? 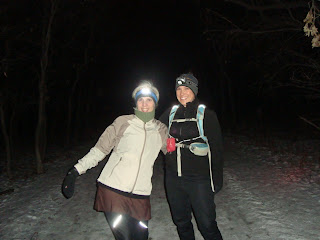 Nicole and Gail showing the pearly whites prior to heading out﻿

When Nicole told me she had a crazy idea to ring in her 39th Birthday, I was thinking ok, this should be interesting, what could it be. A few thoughts ran through my head (a couple I cannot post because this is a family friendly blog), maybe take in Teemu's return to Winnipeg hockey game, maybe crack a bottle of wine open, etc.

Should I have I been surprised when with this little sly smile, she says, "Let's go for a midnight run tonight, maybe 15 miles or so." Well, let me tell you, numerous thoughts ran through my head as I contemplated this suggestion. It's December, in Winnipeg and running at midnight, sure why not, this could be interesting. So with this in mind, we secured a sitter for the kids, Nicole got a hold of the other crazy in her life, Gail and the planning commenced.

The plan, I would go get the sitter between 10 and 10:30, so we could be on the road by 11:00 to pick up Gail for our little adventure. Well great plans always come with some adversity, and I am a firm believer in "Go Big or Go Home", so in all my wisdom I headed out to pick up D or HashBoy as he is so warmly known by in the WH3, with only my faint recollection of where he lived. This would normally be ok because if I didn't recognize the house, then I could just pull out the cell phone and call home to have Nicole confirm the address, well that would be perfect if I remembered my phone. So as I cruised down his street, I thought to myself, I think the house number is 30, well let me tell you that was wrong. As I was sitting outside number 30, I suddenly thought to myself, no this isn't right, the front of the house doesn't look right and I'm pretty sure they don't have a white truck. Great, their going to think they have a stalker sitting outside there house, and the blue and red lights are going to be showing up any minute. So with this in mind, and to ensure there was no bars and guy's named Bubba in my future, I figured it would be safer for me to make the 10 minute drive back home and get the right address before our outing turned into something other than what we had originally foreseen. By the way I was close '38' could be taken as '30' couldn't it.

Anywho, once the sitter was secured and settled in at the house and Nicole all decked out in her Birthday present, a Nuu Muu running dress (not sure why this is important but it sure put a smile on her face and it did look good on her), we headed off to pick up Gail for the run that was serving a couple of purposes. Not only was this a Birthday Run celebration for my wife, but also I deemed it the Inaugural Winnipeg Division of the Canadian Chapter of the Barefoot Runners Society (man that was a mouthful) Group Run. Even though none of us were actually barefoot (I was sporting my ZemGear 360 split toes, Nicole her Minimus Trail Shoes and Gail her trashed Asics), we were going to see where the trail took us on this beautiful December night.

Starting off in the Tim Horton's parking lot at about 11:30pm, we must of looked like three weirdo's to the people inside who were huddled over the Canadian alternative to crack cocaine (Timmies coffee) as they peered outside at us. I can't see what the big deal was, one guy with funny looking reflective shoes, running tights and a head lamp with two hot women also sporting head lamps heading out on a run. Nothing to see here folks, and no officer we have not been drinking, honestly. 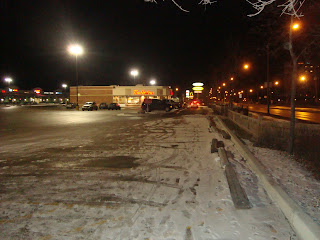 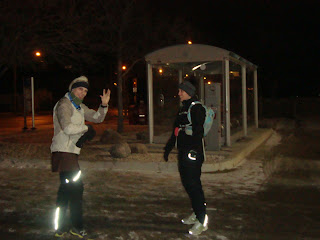 That almost looks like a Nan Noo, Nan Noo wave from Nicole.﻿

As we headed up the road, smiling, laughing and joking about how people thought we were crazy, I'm sure we were getting some interesting looks as the cars passed by. I say, if you can't have a little fun along the way, what is the point, life is to short not to let loose. We got to the entry point of the Assiniboine Forest with good time and proceeded through the closed gates (oooohhh, aren't we the rebels) and had a quick discussion on what the plan was. Both Gail and I chimed in with, "It's your birthday, its your call", so after a couple of quick photos, the turning on of the head lamps we were off. 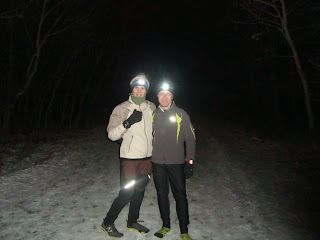 Nicole and I at the start of the Assiniboine Forest Trailhead

It has to be the most surreal feeling to run trail in pitch blackness with only the light from a headlamp to guide you, even with three you can usually see about 10 feet in front of you at best. This really makes you focus on your running form and enhances the rest of your senses to compensate for your lack of sight. Even though Assiniboine Forest is in the middle of the city, it is populated by numerous deer, skunks, many different varieties of birds, the occasional fox, coyote and sometimes a cougar (and I don't mean the ones stalking young prey at the local watering holes) if you believe some of the stories. So some of the sounds that come from the deep dark woods are interesting, you have the creak of a tree branch in the distance, a shaloof of snow falling from a tree, then a crack as Nicole runs into a tree, then followed by laughter as it registers what she has just done. I will elaborate more on this later.

It always is an adventure when I run with these two, it is definitely not about speed nor about distance (at least not always), it is more about the adventure and to see what new twist they can throw into a morning or night run. This one was no exception, as we ran along the trails through the woods towards one of the clearings and a little hillock which would in turn become one of Nicole's areas of pure enjoyment, the ever elusive and endangered downhill run (remember we live in Manitoba). The downhill run to Nicole is like me finding a ice cold beer conveniently bagged and tucked away on a Hash House Harrier Run, it turns her into a giddy little school girl. She starts giggling and laughing as she picks up momentum and pulls away from everyone. Gail and I looked at each other, and all I could think at the time is, typical with a smile and laughed. At this point, I did not see it but a reliable resource has informed me, that in her bravado, Nicole turned around and started to run backwards and 'crack' right into a tree. When we arrive Nicole is standing there slightly dazed but laughing and smiling as she was rubbing the back of her head. Who ever said running was boring, obviously has never run with these two. All I could do was snicker and make sure she was ok.

After the 'Great Tree Incident of 2011', we carried on our way through the forest towards the Harte Trail. We hit the boardwalk over the swampy area (that was currently frozen) and Gail starts mentioning that this reminded her of the story of the Three Billy Goat's Gruff, this got me into reciting bits and pieces of the story that I knew. I continued to have the story run through my head off and on through out the run, thanks Gail. We broke out onto the Harte Trail and turned to the right, or so I thought, and continued on till we hit Shaftsbury Road to the east. This is a funny thing as well as I was sure we were heading west when we hit the trail, but apparently not, this is why you do not follow me in a race as I tend to get lost just as much as Gail does. Poor sense of direction all around by the group. As we rounded the corner and started heading to the west (yes it actually was to the west) along the Harte Trail to finish the loop to Haney Street and then back to Tim's to get a well deserved coffee, tea and hot chocolate.

It was a good run overall, full of laughs, smiles and discussions about crazy bikers who talk about what to do when they fall through the ice of a lake (personally I would think you would avoid trying this but who am I to say, I run barefoot in the snow occasionally) and upcoming races and plans for next year. Nicole discussing her plan to run 40 miles for her birthday next year, because you know when you turn 39 + 1 that is the right thing to do. Overall we ran 5 fun filled miles through the dark on slightly icy streets and trails. Nicole found a new friend in a tree that was quite happy to give her a goose egg for her birthday, and I have had a smile on my face since last night thinking back on the adventure.

So what do you have planned for your birthday? 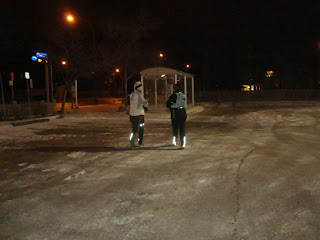 Nicole and Gail heading out 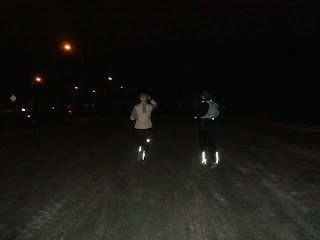 Running along Grant Avenue in Winnipeg at 11:45 pm 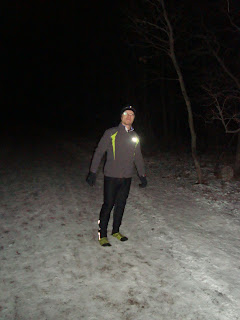 Getting ready to head out into the great dark unknown 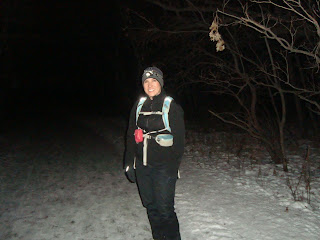 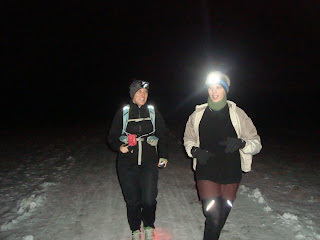 The Birthday Girl and Gail running up Harte Trail Ahhh, coffee, tea and HC awaits at the Tim Hortons
Posted by Unknown at 3:05 PM