My quick trail run with Jo.

Consisted of the following:


Talking about her surprise trip over the border to the US to buy a Bra
The benefits of Bra's
The curse of underwire
Wondering why guys with fancy cameras were taking pictures of a tree.
Sprinting up the very short inclines
Skipping through the tree roots
Commenting on Bouncy Bridges - I think this had something to do with Bra's.
Looking for slugs
Learning that slugs are male and female.  When mating the "Male" get's his penis gnawed off to "complete the job" and then becomes female.
Realising Jo knows WAY TO MUCH about slugs
Almost taking a photo of Dog Poo because it looked like a slug (see below)
Taking a picture of the wrong tree (see below)
Taking a picture of the right tree
Meeting a Principal who was on one of our Autism courses (who was taking an educational walk). Is that code-speak for "getting out of  the office so she could gossip"?
Meeting Gudyip (so badly spelt) who I hadn't seen in a while (He works with Salmon Dave)
Managing not to get too wet until the end (it was raining)


Not bad for a 3 mile (ish) run.  Jo claimed she was timing, (I am still working on getting her to leave her watch behind), but we still don't know how long it really took us. 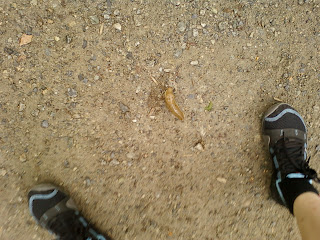 Yep, in my Minimus, jury still out on those.. 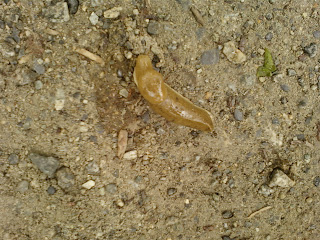 Apparently this is a Banana Slug.  I was going to take a picture of another one, but then realised it was just Dog Poo. 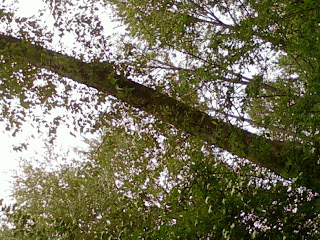 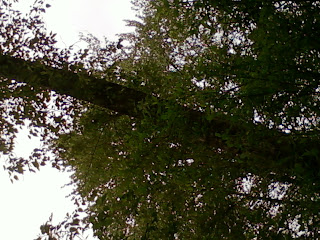 The Right Tree... Can you tell the difference?  Apparently the "men with cameras" were trying to take photo's of the "Largest Woodpecker in the world".  The heard about it on "Twitter", which is kind of ironic as in the UK, "Twitter" means "Bird Watcher"
Posted by Katie Kift at 8:38 PM