As should now be obvious, the "deadlines" for the Run Smiley Challenges are more "really rough suggestions of when, ideally, I'll wrap things up, but its almost certain it will take me at least a week or more to get around to taking my picture, and I'm not ending the thing until I get to take part." But I finally made it out for a) my run b) with a camera that c) had chargedbatteries and d) a piece of chalk.

Other Smilers jumped into the game much faster, and (in what has become the Collectives trademark iconoclasm) started by breaking the rules: only 2 of the 6 submissions involved chalk.

Troy wrote out our logo in rocks: 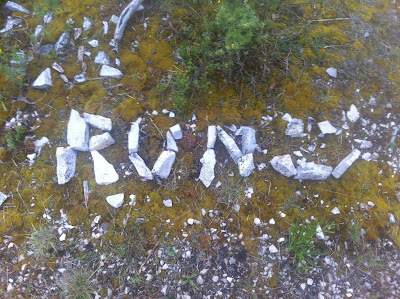 Both he and Ren scrawled "Run Smiley" in the sand: 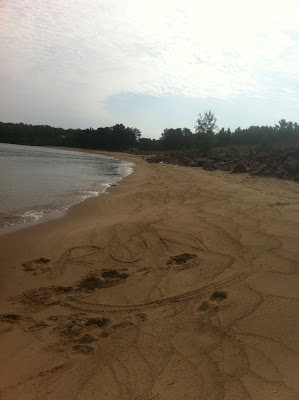 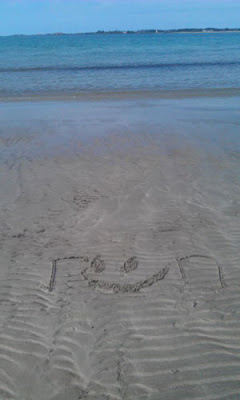 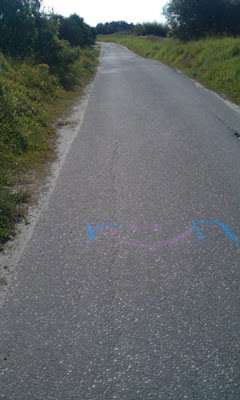 Vanessa completely subverted the dominant paradigm by a) not using chalk, b) not writing "Run Smiley," and c) not writing anything at all: her's is a found-art submission, and a somewhat creepy, Blair-Witch-Projecty one at that: 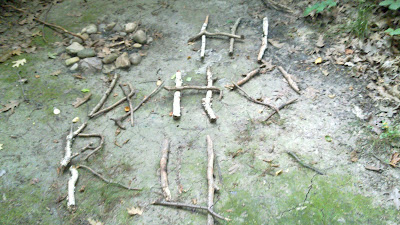 Our Plenipotentiary, Kate, took a little while, since its pretty hard to write anything on water while rehabbing during a swim-run (and apparently the people at the local gym don't want their track written all over: 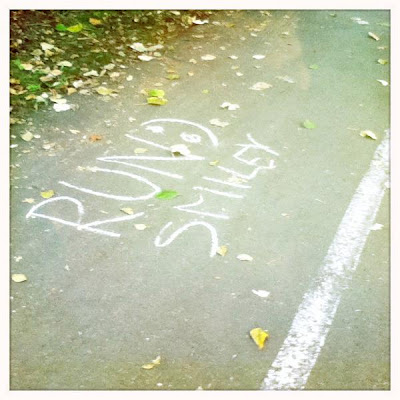 And myself? I finally got around to defacing some cement surfaces myself. I actually had half a dozen slogans I was going to scrawl on the sidewalks between here and Greenpoint, in an epic, chalk-tagging spree, but I quickly discovered that regular sidewalk chalk goes VERY quickly on rough sidwalks: it took me all three pieces of chalk I had with me to get through these two tags: 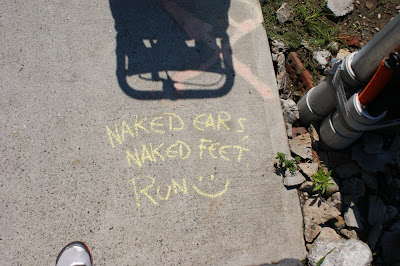 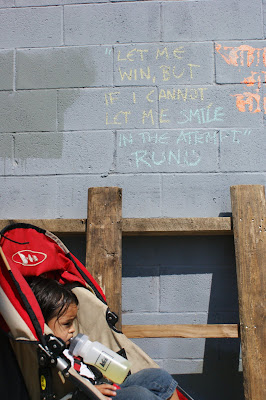 Not sure how well you can read them, but I went and wrote out some slogans I've been tossing about in my head. The first is, "Naked Ears, Naked Feet. Run Smiley." The second is my adaptation of Oath of the Special Olympics. In the original, it reads, "Let me win, but if I cannot win, let me be brave in the attempt." My Oath of the Run Smiley Collective is, "Let me win, but if I cannot, let me smile in the attempt."

The point of all these challenges, when it comes down to it, is to find a new way to inject Running Smiley -- to inject joy -- into your run. Like my most recent post said, climbing a tree and writing with chalk are both borrowed from childhood, and brining that simple, innocent joy into the adult world is a small act of rebellion: a rebellion of joy. I hope everyone who sent me pictures smiled as they crouched over the rough pavement or traced their finger through the wet sand, and even more I hope that others saw the message and smiled themselves. Two, six, a dozen smiles for each message? Possibly . . .

Alright Smileys, that's it for now. I'll throw out another challenge soon: same Bat-time, sam Bat-station. In the mean time, remember: "A smile is just weakness leaving your body."
Posted by The Urban Trail Runner at 10:41 AM