This was the smiliest race I've been to!  It was less about the race itself and more about the people who were there and the fun to be had!  I just had to share!  -Troy "BarefootRoot"

Photo Credit:  The last 2 photos here are courtesy of Johnny and Dee Jeffery!  You guys rock!


This past Sunday I attended the Merrell Naked Foot 5k in Grand Rapids, Michigan.  The early returns are already in from John Yohe and Johnny Jeffery, so we obviously saved the "best" for last.  The other guys had better photos though, so they get extra points for being awesome.  The event appears to have been a huge success, as I am told there were nearly 250 people in attendance!

I woke up at about 4:30AM to get ready.  Colleen and the kids had gotten home about 1:00AM from Grandpa and Grandma's house, so the car was still fully packed and I was glad I had given myself extra time to unload it.  Once emptied, I loaded up our massive double stroller.  The plan was that I would push the kids through the race since they had insisted on coming back so Mirei could run in the kids 1k fun run.  At 6:00AM I got the kids out of bed, got them dressed and hit the road at about 6:40AM.

The kids were extremely sleepy, since while they had slept a bit in the car the night before, they had only been in bed for about 5 hours when I roused them.  Oren fell asleep pretty quickly once we got going, but Mirei stayed awake, promising me she would be ready for her race (which she'd been talking about all week).  We rolled into Riverside Park in Grand Rapids at about 7:40AM to a sparse crowd of early birds. 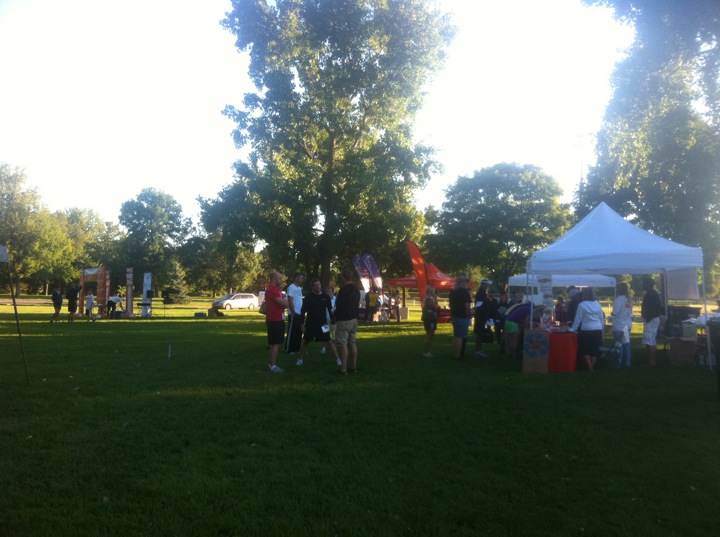 Most of the sponsor booths were all set up, including Merrell, The Hadley Clinic, Gazelle Sports and what I believe was either Forest Hills Foods or Harvest Health Foods (Unfortunately that booth would stay pretty busy all morning and I never really got a chance to see exactly which it was).  There was also some tents where some massage therapists were setting up, but I never found out who they were nor was I able to actually take advantage of their services.

I wandered over to Scott Hadley's booth, where we chit-chatted and I got to meet Brandon Mulnix, a local ultra runner who had run 50 miles the day before with his jaw wired shut!  Dude's got cahones!  I made my best effort to plant myself and the kids in an open space near registration and to look conspicuous, but quickly realized I should have made a sign or something.  There were a lot of people filtering in, and while I knew a few people who were coming most of the folks I wanted to meet up with were unknowns.  This was a weird problem for me, as I can normally find my barefoot peeps at an event just by looking for the other 1-2 people with no shoes on, but EVERYBODY was either barefoot or in some kind of minimal shoe and the size of the crowd made it impossible to pick any faces out.  I would eventually hook up with John Yohe, Johnny Jeffery and his family, Ken Jones and Eric Cooper, but the other 4+ members of the Michigan Chapter were folks I just didn't know.

As the crowd got bigger and bigger, we began to get ready for the kids 1k.  Mirei had been complaining about the cold all morning, and still wasn't looking all that awake.  I had a bad feeling she wasn't up to it but she said she would run in it.  She insisted I run with her (while pushing Oren in the stroller), so we lined up in the back.  The gun went off for the kids and we headed out.  Mirei got off to a bad start, nearly walking through the starting gate, still complaining of the cold.  As the other kids left us in their dust she actually slowed to a walk, which made me really frustrated.  Colleen and I had gone to great lengths to make sure she was around to run in this race and she was totally flaking out on me.  Once we got into the sunshine she perked up and finished strong, but still finished pretty much last.  I was disappointed because I know how well she runs, but she just wasn't feeling it I guess and I had to let it go.

After the kids race we hung out and watched the 1 mile run, which had only a few participants (I think someone said there were 10-12 people in it).  It was a nice run topped off with a triumphant finish by a heavy lady who had run with a young girl.  She looked pretty happy to have finished and the crowd gave her a huge round of applause when she crossed the finish line.

Now for the main event: the 5k.  Johnny's wife Dee offered to watch the kids while I ran, but Mirei decided she had to ride in the stroller.  The others commented on how bumpy it would be and I could only shrug.  Since I was one of only 2 strollers there and the only double stroller, I made my way to the back where I lined up next to Barefoot Ken Bob Saxton, and we chatted for a moment while the race got underway.  The gate was way too small for the assembled crowd, and everyone kind of walked through the gate before taking off onto the course.


The first leg was grassy park lawn with large trees here and there.  I came out faster than many of the people ahead of me, so there was a lot of dodging people and trees until we hit the first section of paved bike trail.  The grass was wet and the ground was kind of squishy, making the stroller hard to push (not to mention I am terrified of running in grass because of what it could hide), so I was glad for some pavement to run on.  I settled into a pretty good pace, passing several people.  I was surprised to see the number of people running in traditional trainers, but quickly realized they were in a distinct minority.  That realization made me feel pretty damn good.

Whoever came up with the course did a good job of finding a good variety of surfaces, as we eventually turned back off the bike path and onto the lawn once more.  This stretch led down by the Grand River and took us through some squishy mud.  It felt good to tromp through the stuff, but the stroller wasn't playing nice with the surface.  After a little more lawn area we got back up on the bike path and crossed a timber decked bridge, so I was making sure to watch for protruding nails or anything that said "splinter" on it.  The course would eventually turn off onto a road, requiring some careful negotiation of the concrete curb-stops along the edge of the road (my stroller was far too wide and I needed to slow down and lift the back wheels over the blocks).

I was keeping a pretty steady pace, moving pretty quickly considering I was pushing nearly 100 pounds of kid and stroller.  I was dismayed to learn that the back half of the course would be back on the grass though.  I kept hoping for some more pavement but never got any.

I did my best to hold the pace I had at the halfway point, slowly persistence-hunting the people in front of me while I barreled through the wet grass and mushy ground.  The stroller was bouncing all over the place and my legs were burning.  Anyone who's ever run while pushing a stroller knows that it's about twice as hard as running alone.  Add grass and soft ground to the equation and it's closer to ten times more difficult than running solo.  Eventually my legs would get the better off me and I would walk for about a minute.  I can't remember the last time I walked in a 5k, but there I was.  I wasn't feeling all that impressive, but I knew I needed some rest if I wanted to finish strong.

The course would wind around some baseball fields and around the parking lot before heading into the final stretch to the finish line.  Once I had it in my sights I told the kids to hang on and went for an all-out sprint to the finish, determined to pass at least a couple more people.  With the stroller catching air off every root and my legs flying beneath me the crowd cheered as the stroller and I flew across the finish line in just over 30 minutes.  As hard as the run had been I was all smiles at the finish, knowing I was the only one bold enough (or stupid enough) to tackle the course with the kind of load I was pushing.

When all was said and done, there was plenty of mingling with all my barefoot friends, comparing notes on the course, finish times, and how many shoddies we saw.  Many of us would head over for a clinic by Jason Robillard while the kids finally got out of the stroller to go play.  Jason said he'd been working to simplify his teaching method, and his ABC's method certainly accomplished that well.  It was well worth seeing.

After the clinic we tried to gather as many of our Michigan Chapter members as we could, and managed to get myself, John, Johnny, Ken Jones, Scott and Jason into a fun group photo.  Meeting Jason was a great thing for me, as he complimented me on my efforts as Michigan Chapter President.  It feels real good to have one of the guys you look up to give you the thumbs-up.  Afterward we all headed for our cars, and on the way got another photo-op with Ken Bob, which was also an honor.  I consider him an honorary Michigan Chapter member as he grew up here.  I'm not sure what kinds of questions he gets from the people he meets, but the one thing I asked him was where exactly he was from (he mentions the Traverse City area in his book) and was pleased to learn he was from Grawn, a little town I remember because my mom and dad grew up in nearby towns themselves.  When I mentioned my dad was from Mesick he said "yeah, it makes Mesick too..." and went on to say "The main thing I remember is playing my only night game in pee wee baseball there and getting hit in the face by a pitch."

After the final photos were taken we all headed for our cars.  We all had a great time and met a lot of great people we had spoken to online but had never met in person.  It was definitely a great way to recharge the batteries as far as my duties as Chapter Prez.  Being able to see all those guys in one place and having such a good time makes it all worthwhile.
Posted by Troy at 4:40 PM